The Art Institute’s incredible exhibit “A Voyage to South America: Andean Art in the Spanish Empire” will end its run on February 28, 2016–just a few days from now. I talk a lot about Latin American history; I’ve even talked about José Gil de Castro, free man of color, who painted the tale of the wars of independence. And, now that its course has been almost run, I’ll finally write about this exhibit. 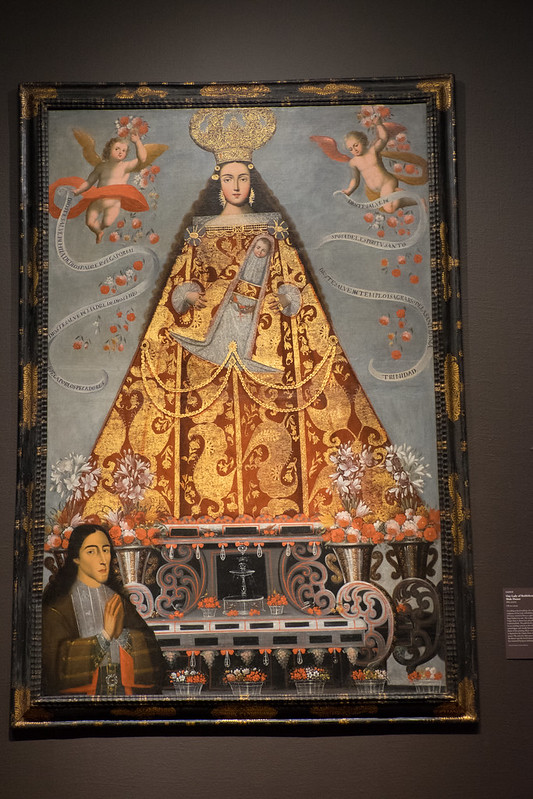 Image of Our Lady of Bethlehem with a Male Donor. 18th century Cuzco School painting by an unidentified artist. Image by Darren and Brad of Flickr.

Most–but, as I recall, not all–the paintings present in the exhibit reflect the Cuzco School, of which Gil de Castro was also a member. For those who aren’t versed in the incredibly rich and varied cultural heritage of Latin America, the Cuzco School is widely known for, among other traits, its flatness and interesting perspective. Nenita Ponce de León Elphick writes in her dissertation that Cuzco School artists utilized “flat, linear style and decorative surface patterns … in religious painting,” as well as in secular works.1 Similarly, Ananda Cohen writes: “Characterized by a bright color palette, flattened forms, indigenous symbolism, and” a whole lot of gold, “Cuzco School paintings acquired a palpable ‘Andeanness’ never before seen in Peruvian painting,” stylistic choices which also carried over to murals painted by artists of the Cuzco School.2 The paintings presented here are, in short, possessors of the “Andeanness” of which Cohen writes; they are meldings of the European and the Peruvian.

The painting of Our Lady of Bethlehem with a Male Donor, by an unidentified member of the Cuzco School, seems a rather perfect illustration of the styles described by Elphick and Cohen. It is flattened and linear; in fact, Our Lady (and her child) are actually statues with clothing. The painting is heavily adorned with gold and, even now, centuries after it was painted, it still fairly bursts with color and vibrancy. I’m not an ideal person to read indigenous symbolism, but I would guess that it is, indeed, present in this painting, as it is in several others.

Indeed, among the paintings is one depicting Mama Ocllo, Andean fertility and mother goddess. (She was also, apparently, quite the weaver.) Since I could not find any creative commons licensed images of Mama Ocllo, and since I can’t find the pictures I thought I took at the exhibit last year, I have chosen to share one from the San Antonio Museum of Art. The images are rather similar, showing much of the same iconography; however, the painting at the Art Institute is in decidedly better repair, colors bright and fresh and strikingly lovely. Similarly, Mama Ocllo (who is rather decidedly paler) holds a bird, rather than a mask, wears sandals, is adorned with tons of gold (remember the characteristics of the Cuzco School), and, at least to me, looks a good deal less placid than the mask-holding goddess of the San Antonio painting. (The cheery dude with the parasol is in both–he is, I think, part of her iconography. But he has all the gold in the image from the Art Institute of Chicago. 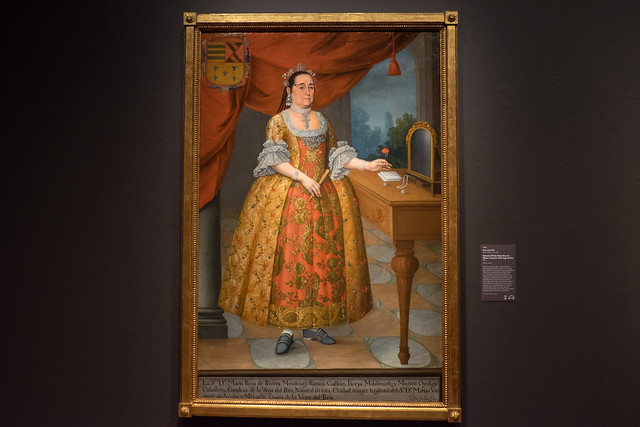 The lady above has an impressive beauty mark, but that isn’t why I’m closing with her. You see, I love Doña María’s surname. It’s telling us, more or less, that she comes from an old and respectable family. No conversos here, that chain is all but screaming. (I mean, it could be lying.) But mostly I just love it because I also come from an old family, and I have a hyphenated name. I’d historical fistbump except I have no doubt that she’d take one look at me and count me off as a tavern wench. But that doesn’t matter. What matters, guys, is that she has one hell of a glorious surname. Ha! Twelve-character surnames are nothing compared to her glories!

On a more serious note, the art on display for only a few more days at the Art Institute offers an amazing, and rather unprecedented, glimpse into the cultural scene of the Andes during the Spanish Colonial period. We have a rare chance to see one way of melding indigenous and Iberian customs; we are able to view paintings in which indigenous people stand, proud, front and center, draped in gold and fêted for their importance and their contributions. We see Western religious paintings incorporate indigenous symbols; we even see Mama Ocllo herself, not bothering to masquerade as a Christian saint. In short, if you are interested in Latin American history, or in historic art; if the melding of lo indígena and lo europeo interests you, and if you are anywhere near Chicago–take a pilgrimage to galleries 212 and 212A, and visit “A Voyage to South America” before it leaves.

One thought on “For a Few More Days: Art from the Viceroyalty of Peru”