We peoples of letters have a knack for believe that we, and only we, are capable of creating literature, of composing epics, of recording our histories. We are the greatest at convincing ourselves that our way–only our way!–is The Way to remember stuff, and so we wander around in public telling our best bros that there were no records then because they didn’t record stuff back in the day, don’t’cha know, that had to wait for the Spaniards, and then somebody hears us and tell us we’re wrong and should just boil in our wrongness while we’re at it. (In case it isn’t clear, I was the latter, recently.)

What do we do when we hear wrongness? We fight, just as Captain America says. From Giphy.

But the thing is, there are so many ways to remember, and memory itself–whether individual or collective–is such a complicated, multifaceted thing. And, finally, just because we can’t read it doesn’t mean those who came before us did not leave written records behind. In many cases, they actually did. This is, indeed, quite flagrantly true through pre-contact Latin America, where scribes and artists were busily recording the past and plenty of folks were actually literate. It is us who cannot read what’s been left behind, not them who did not record it.

My MA advisor, who happens to be a genius, started out many a class in colonial Spanish-American literature with the piece above, the great, glorious Aztec Piedra del Sol, or Sun Calendar. This, she would say, emphatically (and in Spanish), this is literature! (It should be pointed out that really old literature–the sort of stuff I adore–is a fascinating mix of literature, art, history, and anthropology/sociology, anyway.) Moreover, the Piedra del Sol is just one of many such records, living memories carved in stone for the world to see, here and forever, amen. Gordon Brotherston, in “America and the Colonizer Question: Two Formative Statements from Early Mexico,” writes of a system of writing–tlacuilolli–intricately tied, after the destruction of treasure troves of books, to the stone calendars on which we see it today, and of American scientific and cyclical knowledge far surpassing that of the invading Europeans.1 Imagine: one comes planning to be a god in a strange land, and one discovers that actually one’s cherished technology is pretty backwards, and one’s native land is kind of grubby and poorly planned, compared to these great cities of the Americas. Awkward, no?2

Similarly, Camilla Townsend, in the journal Ethnohistory, writes that the Nahuat-speakers “of central Mexico left for posterity a deeper trove of written records than any other indigenous group in the Americas”3–a statement which might be somewhat hyperbolic, indeed (many indigenous people had an extensive literary output), but which nonetheless makes a strong case for una gente letrada–a literate people–long before the coming of the Spaniards and their westernized alphabet. The giant Stone of Tizoc, pictured above, is a dual-purpose monument: it could store the hearts of one’s enemies (or sacrificial victims), and it served as a giant monument to Tizoc, the guy who commissioned it. Unfortunately for good ol’ Tizoc, he wasn’t the world’s greatest military mind, and was only on the throne for a short time. (Poor dude was only the Lord of Tenochtitlán for like five years, which was, I think, unprecedented.) Regardless of his prowess (or lack thereof), Tizoc left us another brilliant piece of Mesoamerican, pre-contact literary output, if we can but read what he’s had written. Should we then deny the Aztec their literature, their records, their histories, simply because we can’t read? Would that not be like the child-me, illiterate, insisting that my favorite writers hadn’t actually put down words at all? 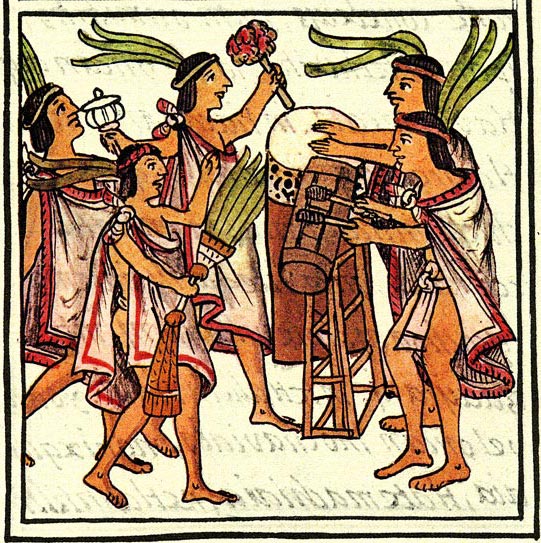 Illustration of the “One Flower” Ceremony from the great Florentine Codex. Wikimedia Commons.

Now, so far I have covered the Mexica people, also known (today) as the Aztec. There’s a reason for this: the folks I overheard were making fun of Aztec records, and Aztec gods. (Now, I don’t know about you, but I make a point not to make fun of gods who want that much blood in tribute. Besides, they are not my gods and thus I have no right to mock.) And, the thing is, the Aztec Empire did leave behind records–records which they continued to expand following the coming of the Spaniards, when they salvaged Spanish writing systems to tell their own stories, as much their way as possible. But they were not, by a long shot, the only literature people of what became (and no longer is) Spanish America.

I learned rather the hard way–that is, by reading popular stuff and listening to people in large groups–that a lot of people seem to think the Maya Civilization disappeared, sinking into nothingness long before the arrival of the Spaniards. Buena gente, I am here to tell you that this is flagrant and offensive nonsense. Just because Teotihuacán fell does not mean that the Maya, too, disappeared into the jungle. In fact, the Maya are still here today. The Maya left us something more than simply vast and advanced cities and magnificent sculptures and living languages and people, however: they left us written records. Lots of written records.

The Maya were, by and large, a literate people. Matthew Restall, placing them among “the most literate native societies,” writes that literacy levels among the Maya and the European conqustadores were actually fairly similar, as most were “semiliterate,” while some–likely nobility and, of course, scribes–were “fully literate,” and others “fully illiterate.”4 In short, the Maya, as a cultured people, were largely able to read and write–at least a little. And, as evidenced by the (small) fragment of the 13th-century Dresden Codex, above, they were quite able to keep their own written records. I would, myself, argue that if we cannot trust documents left us by the Maya, then we certainly cannot trust those of the conquistadores, who included bros like Francisco Pizarro, the illiterate son of a pig farmer. (I don’t know why this stuck with me quite so much–I think I actually learned it in my first Latin American history class, way back when in like 2006 or 2007, but there you go. It’s the little things, apparently.)

The Maya evidently placed great importance upon scribes–no doubt they knew, just as well as anyone else, that history is written by the victors, but that the vanquished, as long as they can write, will tell their own stories differently. In his article “Broken Fingers: Classic Maya Scribe Capture and Policy Consolidation,” Kevin Johnston argues that Maya rulers made a concentrated effort to break captured scribes’ hands, the tools of their trade–they were, he posits, dangerous to a victorious king’s ability to twist historical narrative to suit his needs, and to celebrate his victories.5 Smashing a scribe’s hands seems quite horrific, yet in truth, throughout history, across continents, victorious lords have done their best to silence the pens of the opposition. Evidently the Maya agreed that the pen could be mightier than the blade, and took pains to ensure that their versions of history would be the ones to survive.

Much of the Maya records that survive today are, much like those of the great kings of Asyrria and Babylon, stelae, set in stone for posterity. We would no doubt have more books–codices or otherwise–were it not for, as Brotherston reminds us, the wholesale burning of “books in New Spain and quipus in Peru”6–wanton destruction of a peoples’ history and knowledge, on a far grander scale than the broken fingers of vanquished scribes. Yet the Maya–and the people we call Inca, as well as the Mexica (or Aztec)–continued to keep their records, their own way. Part of this is simple: it’s kind of hard to burn stone monuments, although the Spaniards definitely tried when they pulled down Tenochtitlán, using its monumental stones to build Mexico City. But indigenous literacies carried on in other ways, too. In fact, Judith Maxwell argues that the highland Maya preserved their language and pictorial alphabet through such mediums as textile art–and, thus, the very clothing they wore.7 The Spaniards may have come, may have imposed their systems and their ways upon the people in the Americas–but yet those old ways were, and are, preserved, still a living part of Mayan culture today.

I have barely touched upon the surface of literacies and of record-keeping in precontact Latin America, here–and I have focused largely, if not exclusively, on the Aztec and the Maya, though they were hardly the only people to have maintained their own records before the violent coming of Europeans. Had those Europeans cared at all about the histories of the places they were determined to commandeer, or the people they were trying to vanquish (always with the help of indigenous allies–divide and conquer is a time-honored, and honed, technique), we’d have even more records. The Olmec were leaving written records in 900 BCE, if not earlier.

Nor did the Aztec or the Maya stop recording their own histories merely because another empire rolled in on tides of blood. Instead, despite the book-burnings (a timely issue, as we approach Banned Book Week!), scribes kept right on scribing, using whatever alphabets were most helpful at the time. The age of the great Aztec codices was only beginning. The Quechua nobleman Felipe Guamán Poma de Ayala would pen his mighty letter Nueva Crónica y Buen Gobierno, written partially in Spanish and partially in Quechua, and send it off to the king (it never got there, but it did end up in Denmark! And they helpfully put it all online). And, later, el Inca Garcilaso de la Vega would write his own chronicle, Comentarios Reales de los Incas, which I’m pretty sure doesn’t have a single picture. (At any rate, all I can remember are the words, of which there are definitely plenty.)

Records of the before-the-conquest abound. Records of the before-and-the-after also abound, both in words and in images, and, as José Rabasa reminds us, we must work to remember the importance of “visual communication of iconic script”8–after all, memories, and records, are transmitted in many ways, and our Latin alphabet and Islamic numerals are hardly the only ways to do so. It is to our communal shame that we people of alphabet-letters have long held ourselves as superior, often going so far as to consider other ways and methods of record-keeping as markers of barbarism.9 (I’d like to believe the whole civilización y barbarie thing went out with Sarmiento, but that is definitely not the case.)

Writing–using both Latinized and pictorial alphabets–became, following the Conquest, a space of resistance, a place to claim one’s heritage and one’s culture, and to transmit one’s own histories to the future, in spite of the colonizers’ attempts to curtail such activities. Brotherston points out that though we more often think of the Martís and the Bilbaos (he recommends also thinking of the Silkos), yet “colonizing Europe was challenged intellectually in America” from the very beginnings of the conquest.10 Similarly, throughout “Thinking Europe in Indian Categories” Rabasa writes of resistance to dominance through written and pictorial records.11

Doña Marina/La Malinche and Hernán Cortés lead the way in this page from the Codex Azcatitlan. Wikimedia Commons.

From stelae to temples, from sculptures to codices, the Maya and Aztec have left us a plethora of records. People were recording their histories a long time before Spain stumbled across the Americas, and they kept right on recording it after the Spanish arrived in their world. (For it was their world, not Spain’s.) If we don’t know how to read it, that’s on us,12 not them.

For a Few More Days: Art from the Viceroyalty of Peru

Rabasa, José. “Thinking Europe in Indian Categories, or ‘Tell Me the Story of How I Conquered You.'” Coloniality at Large, edited by Mabel Moraña, Enrique Dissel, and Carlos A. Jáuregui, 2008, 43-76. 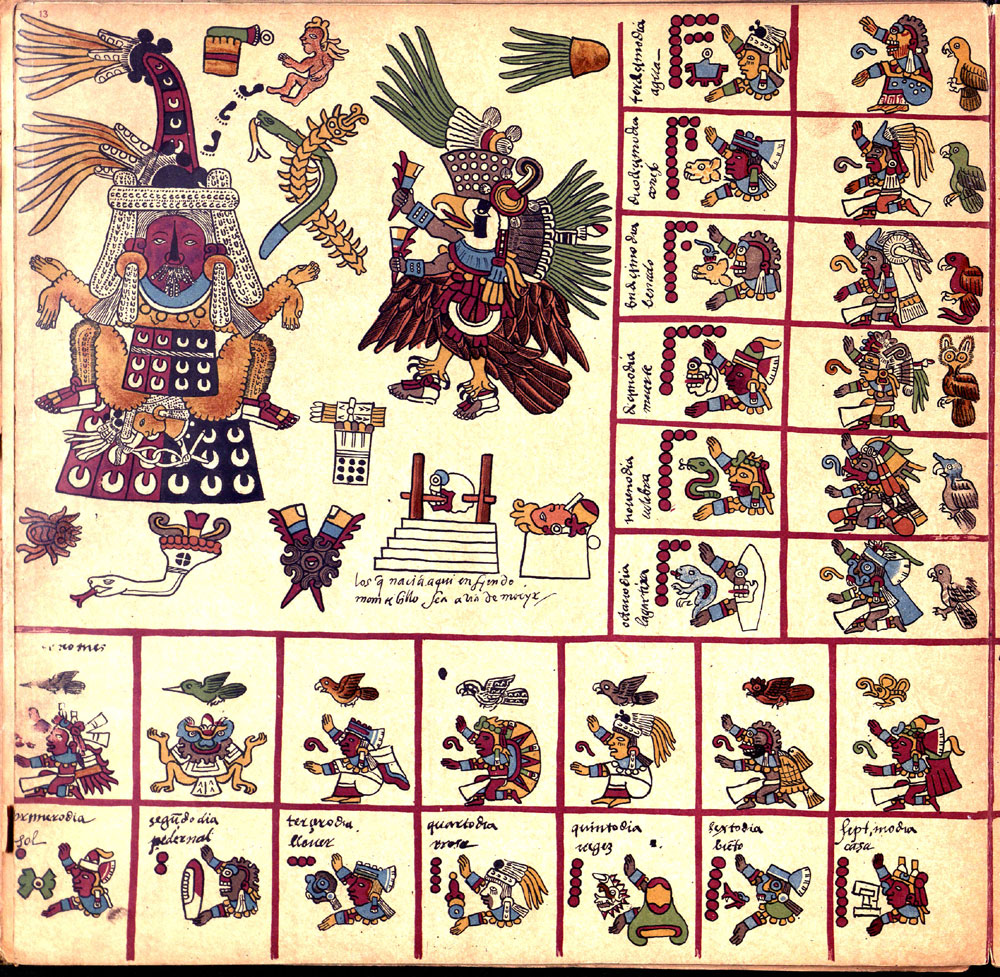