It’s snowing! It’s the first snow of the year, and, though it’s hardly enough to go skiing, it’s enough to coat the world in fresh white, making it pristine and lacy and lovely. We do exist, you see, even here: we winter-lovers, for whom the first snow should really be a holiday, we who take winter vacations only to the north, for the skiing, and the skating. My parents put me on a pair of the tiniest cross-country skis you’ve ever seen (or not seen) when I was around two; I have no more memory of learning to ski than I have of learning to walk. Around the same time my late grandmother, tiny and fierce, strapped tiny skates onto my little boots and held my hands as I learned to skate on the pond on the family farm near Wisconsin Rapids, and ever since–well, likely even before–winter has been a time of warm family memories and pristine beauty for me.

The Oatmeal’s dude from Bumbelch, Nebrahoma could be my mother, because apparently it snowed fifty feet a day in Vermont when she was a kid, and of course school was never canceled until it was forty below, because those were the days, my friends! She actually is phenomenal if you’re stuck in the snow; she legitimately loves to get people unstuck. (I don’t get people unstuck; I merely snicker at them, and mind my rocking.) I learned, when I went off to grad school in Chambana, that there are actually people who believe that Chicago is the Great White North or something–which, since I have parents from Vermont and the Wisconsin snowbelt, was first startling and then hilarious. And, of course, because I am a lover of winter, I visit the winter paintings at the Art Institute a lot, when I go. Thus, I present: a few of the winter paintings (or photos) I like to visit at the AIC.

Childe Hassam is one of my favorite artists, which is probably because the Smart Museum of Art on the University of Chicago campus has a few of his paintings–and I spent a lot of time there, when I was young and impressionable. (Krannert Art Museum, in Champaign, also has some of his works–I felt much better every time I was able to go see them.) I don’t know what Hassam thought of cold weather, but he did paint it, delightfully, many times. New York Street, from 1902, lives in the Art Institute’s lovely American Art collection, downstairs with all those odd and fascinating sculptures from our odd and fascinating sculptural past. Hassam was an American Impressionist, and each impressionistic stroke catches, to me, worlds of snow, and the play of light on snow. It appears that nobody’s bothered to shovel yet, back in New York in 1902; my mother, of course, would assure us all that in the good ol’ days, everybody shoveled right away, so apparently the good ol’ days hadn’t started yet (or maybe that just happened in Vermont and Wisconsin). Snow removal or no, however, these folks are heading about their daily business–even if said daily business includes wearing a bustle. (I’m so glad that style’s gone the way of the t-rex.)

George Bellows is a very American sort of artist, and, like me, a very urban-dwelling sort of person. He’s known for paintings as diverse as Cliff Dwellers, with its unerring focus on the tenement-dwelling poor, and for Dempsey and Firpo, which Allen Barra, writing for the Atlantic in 2012, tells us is “the greatest American sports painting” in the history of American sports paintings (which is an incredibly interesting history that should, I think, be celebrated far more often than it is). Like me, Bellows also really, really loved winter. Love of Winter, which really must be seen in person at the Art Institute, is one of those magic paintings which, for me, captures light and laughter and excitement and pure pleasure of being, all in strokes of paint and hurrying, pulling people. From the kid who really, really doesn’t want to leave yet to the people freezing their fingers as they tie their laces and the vast packs skating as fast as they possibly can, I have definitely been there–and, in fact, almost every time I go to the Art Institute, I pay Love of Winter a visit. It’s a wonderful reminder, in the summer, that winter really is going to come. Eventually. 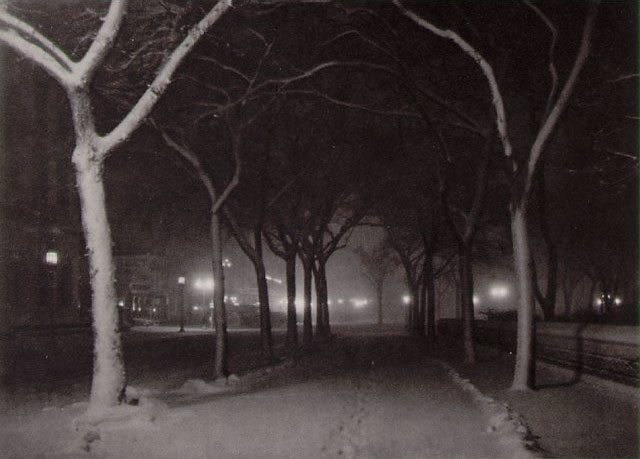 Mostly I really wanted to include Stieglitz’s An Icy Night because I saw it in the Art Institute’s exhibition Alfred Stieglitz and the 19th Century, which goes through 27, 2016, and to which I recommend you go–if only to see An Icy Night in person. I’m not entirely sure what it is about the image, but somehow, it’s perfect: there the footsteps, trudging onwards; there the splashes of stars from lamps, there the trees thrusting their snow-laced branches upwards into the darkness, there the little ridges from a shoveling, long enough ago, now, that the sidewalks have once more been covered. In case it’s not yet obvious, I’d love a giant print of this to stick up on my wall, to study when the relentlessness of summer has got me down.

Stieglitz did a number of rather lovely winter scenes, surely no mean feat in a day when photography meant a lot more than selecting a lens for one’s Canon or Nikon or Leica, grabbing film (if one shoots film), and keeping Central on speed-dial. Winter–Fifth Avenue looks rather a lot like the streets in my neck of the woods today, if one replaces diligent horses and cold coachpersons with drivers who got a little excited and went off the road. (Today is not a good day to showcase one’s muscle car‘s fab acceleration. Just an fyi.) Whenever Stieglitz captured Winter–Fifth Avenue, I am guessing that the mercury hovered around 32°F (0°C): much lower, and that tell-tale look of slush wouldn’t be present. Also, there are a whole number of Stieglitz takes on winter on display at the Art Institute’s exhibit–which, really, seems to me reason enough to go.

Claude Monet’s1 vision of the town of Sandivka, Norway, in the winter of 1895 is charming, idylic (at least to those of us who love winter) and, to my mother, something close to a nostalgia trip, as it reminders her–a lot–of those small towns in Vermont where she once lived. (I look at it and think of small Wisconsin towns, with a few bars, a church, and a ski hill, just over yonder.) A lot is left to one’s imagination, here: has someone crossed the bridge yet today? Where on earth is the painter hanging out?! (According to information provided by the Art Institute, he was probably outside for at least some of it, as bundled up as me, surprising and/or entertaining the locals.) While Bellows catches, for me, the excitement and the bustle of a cold, snowy day, Monet has captured its peace.

Hiroshige is, clearly, not painting the Japanese Garden on Wooded Island in Jackson Park–there’s a mountain and all sorts of other stuff that one wouldn’t find behind the Museum of Science and Industry. But the scene itself? Much like Monet’s Norwegian village, Drum Bridge exudes the calmness of a snowy day. People might be bustling, sort of–but they’re also enjoying the water, which apparently isn’t frozen–that’s probably some mighty heavy snow, there. The Art Institute, incidentally, has this woodcut (or one very like it); however, due to the fragility of prints, drawings, and etchings, it is not often on display.

Standing under a tree with an umbrella in the snow can apparently be sexy! Or, at any rate, that’s the message I have always taken from Suzuki Harunobu’s woodblock print depicting a pair of sweethearts, chillin’ under a tree in the snow. It’s a really beautiful scene, but I really think that they’re about to get snow down their necks. Which I can’t imagine is terribly romantic at all. Hey, maybe it’ll even get chucked by the girls working so diligently on this snow dog here!

This print is ever and ever so rarely brought out; it, like the other prints here, is incredibly fragile. But, even though I have never ever in my life skated in that sort of get-up, it is actually pretty similar to today’s skating rinks, filled with people bustling around, and hanging out together (there are always a few, odd as it seems), and, randomly, apparently pulling each other’s hair (see the lone figure reaching for a braid, back there–maybe she’s about to tip over). Homer doesn’t just catch the vibe of the local rink, here; he even catches the tracks the skates have left on the ice, making it an incredibly realistic image of a heavily-used ice rink. In fact, fancy-pants in the upper right is, most likely, leaving some rather deep gouges as he showboats around the rink.

The engraving above–also rarely let out of its climate-controlled home–is really special, mostly because, aside from the whole hoop skirt routine, it’s really similar to the place where I learned how to skate. The ice is packed, here, probably with a family group; I can imagine a bonfire, burning just out of sight. There are even some kids plopped down on the ice, either because they fell down or because they decided that now’s a great time to just sit on the ice and slow all the people down. (It could be either.) The pond where I learned to skate is a lot scrubbier than this, and the neighbors had large, insane dogs, and somebody had sand pits, and of course our farm wasn’t exactly in farming shape anymore–but, when I see this print, I remember Grandma holding my hands as I tottered around the ice, learning how to get my skates under me.

The folks in Kanbara: Evening Snow look, at least to me, like commuters, plodding their way home after another long day at work. (They also look a little like most of the people I saw walking their dogs today: the owners were studies in tragedy, poor suckers, while the dogs danced and pranced all over.) As with other prints (and many photographs), Kanbara isn’t often on display, though I wish it were. Hiroshige, whose winterscapes have made winter art lists2 from the HuffPo and the BBC, really does have a way with winter. Although, truthfully, I think he probably just has a way with art in general; his woodblocks are exquisite.

So, winter is coming, finally. And, while it isn’t strictly true that the cold doesn’t bother me–I do, after all, bundle up enough to far outdo Area Girlfriend of Onion fame, and I wear a parka almost to my knees and wool socks every day–well, it’s close. After all, I do know how to dress to manage it! Winter will, of course, most likely melt before Thanksgiving, which is a tragedy–it means no death-defying tobogganing down my uncles’ bluff, which is always a ton of fun (it’s probably also dangerous, but whatevs). Today’s apparently record-breaking snow, currently creating a pure white wonderland outside, was the heavy snow of just-barely-below-freezing temperatures–not so great for skiing, even if there’d been enough. But I’m hoping that soon there will be enough for me to bring out my skis for the first time in years. In the meantime, I’ll probably start hunting down all the ski-related art I can find, because one can never have enough cross-country ski images. And, in the meantime–stay warm, and don’t sit on the ice. It isn’t anywhere near as much fun as it looks, I promise.

1 For more on Monet and his paintings, see this e-book from the Art Institute.
2 So, winter art lists are a thing! Which is great! Some of them can be found at the following: